Tin-Tin is one of T-Bird’s men and also the one who raped and cut Shelly, leading to her death. He is known for his talented use of knives and being a frequent patron of Gideon’s pawn shop, where he sells the loot from his crimes. Tin Tin is portrayed by Laurence Mason, in the 1994 film, and by Darcy Laurie in the TV series.

Not much is known about Tin-Tin prior. However, in the flashback he was one of the main rapists of the group alongside Funboy. He specifically cut Shelly violently, licking the blood off his knife in sadistic glee. When Eric Draven walks in on the crime, Tin Tin was the first to react by throwing a knife at Eric, disabling him, before restraining Eric along with Skank so that Funboy and T-Bird take turns shooting him in the chest; they then throw Eric out the window to his death.

One year after the murders, Tin Tin was seen with Funboy, T-Bird and Skank, trashing an arcade and rigging it to explode. Later, he participates with them in a drinking game, involving swallowing bullets with shot glasses. He starts a fight with Skank, calling him a pussy, which causes the entire gang to pull guns and knives on each other. They then start chanting “Fire it up” before putting their weapons away at Darla’s request when she brought them more shots; Tin Tin takes the opportunity to lick Darla’s arm in the process.

Tin-Tin was later seen haggling with Gideon over the price of his looted ring and purse. Gideon rips him off by only giving him $50 for the lot. Tin Tin takes it while insulting Gideon, to which Gideon fires back by demanding he lock the gate on his way out — which Tin Tin does while speaking in a mocking slave tone before shooting Gideon a rude hand gesture and talking to himself about stabbing him.

At this point, Eric had already risen from the grave and tracked him down to an alley way where he is lighting a cigarette and keeping warm near a burning trash can. When he sees Eric approach, he initially mistakes him for a crack head and picks a fight with him. Eric (who at this point was completely silent in his rage) tackles him down. Tin-Tin puts up a fight and even manages to get a punch in Eric's face, but to no avail. He tries to slash at Eric with one of his knives, but Eric disarms him and pins him to the wall, screaming, “MURDERER!”

Tin-Tin denies murdering anyone — not even recognizing Eric through the makeup. When he demands to know what Eric wants, Eric demands him to tell him about what happened one year ago — specifically accusing him of cutting and raping Shelly. Tin Tin taunts him, claiming that Shelly enjoyed what he did to her, causing Eric to lower his guard. Tin Tin takes the opportunity to beat him senseless with a nearby pipe before dropping it in favor of his knives, bragging that he never misses. When he throws the first knife, Eric dodges it. When he throws the second knife, Eric smacks it out of thin air, goading Tin Tin to try again. Tin Tin throws one more knife, which Eric catches (much to Tin Tin’s surprise) and throws back at him, impaling and pinning his shoulder to a crate.

While it wasn’t shown on screen, when Eric goes to Gideon’s pawn shop later on, he remarks that Tin-Tin confided in him on the location of Shelly's engagement ring before he ran out of breath.

Tin Tin was later shown dead and being hauled away by paramedics with all his knives stuck in every major organ in alphabetical order. This implies that Eric stabbed him, torturing him for information regarding the ring before finishing him off. His blood was used to make a crow-shaped emblem on the wall. 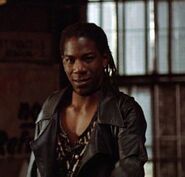 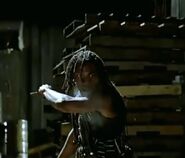 Tin Tin getting ready to throw a knife