The Crow Wiki
Register
Don't have an account?
Sign In
Advertisement
in: Characters from The Crow (film), Antagonists

T- Bird was the leader of a gang that resided in a neighborhood in Detroit, Michigan. He led his gang in the assault and subsequent murders of Eric Draven and Shelly Webster. T-Bird had been killed by Eric when Eric was seeking revenge after being resurrected by the crow. T- Bird is portrayed by David Patrick Kelly in the 1994 film adaptation and by John Tench in the 1998 television series.

On a cold October night, while driving on a dirt road, T- Bird and his group approach a young couple (Eric and Shelly), whose car broke down. T- Bird stops his car and T-Bird and the rest of his gang; Tin Tin, Funboy, Top Dollar, and Tom Tom get out of the car offering some assistance. Eric tells T-Bird that they don’t need help, and T-Bird insists. When Eric refuses again, T- Bird suggests that his group check on Shelly and his group surrounds Eric’s car. When Eric pushes Tin Tin away, T-Bird shoots Eric once in the head, causing him to collapse. T-Bird asks if Shelly has any parting words for Eric before shooting Eric again, paralyzing him. T- Bird is called away from Eric by Top Dollar, and T- Bird instructs his gang to take Shelly out of the car. T-Bird then proceeds to rape Shelly while yelling at her to be quiet when she starts screaming and crying. While Tin Tin is taking his turn with her, Tom Tom pushes him out of the way and starts kicking Shelly in the head when she keeps screaming. T-Bird then pushes Tom Tom out of the way and shoots Shelly in the head. When Funboy wanted to take his turn with her, T-Bird tells him that half of Shelly’s head is gone. After confirming that they got Eric and Shelly’s rings and wallets, T-Bird and his gang leave as it starts to rain.

One year after the murders, T-Bird is in his apartment when Funboy informs him that Eric, the man T-Bird killed a year earlier, has come back from the dead seeking revenge. T-Bird just dismisses Funboy as being high. When Funboy tells T-Bird that he told Eric that they would both meet him on the highway, T-Bird just dismisses Funboy as being stupid and tells him to get out of his apartment.

Later that night, T-Bird and Shelby The Giant arrive at The Fishbone Room. T-Bird asks Dee how many people he’s gathered and Dee says fifteen. T-Bird says that Funboy said that they were on a ghost hunt and he asks Dee if anyone cares. When Shelby asks T-Bird if he believes in ghosts, he tells Shelby that he believes in “...dope, guns and broads.”

While driving with Shelby, T-Bird listens as Shelby describes his encounter with Eric. Suddenly, Shelby is shot in the head by an unknown assailant. As T-Bird frantically tries to use the windshield wipers to clean the blood, a resurrected Eric sits on top of T-Bird’s car telling him that the blood is on the inside of the car. Eric instructs T-Bird to get out of the car and tells him he wants T-Bird to watch as Eric kills his foot soldiers. T-Bird gets out of his car, backed by all of his “foot soldiers” and confronts Eric. T-Bird tells Eric if he’s really the same guy from a year ago, then he must’ve gone mental from the gunshots to the head. When the group empty out their bullets on Eric, T-Bird tells them to stand their ground saying that Eric must be tricking them since the bullets had no effect. T-Bird watches in horror as Eric effortlessly kills his men. In a panic, T-Bird gets in his car and drives away with Shelby’s corpse still in his car

As he’s driving, T-Bird gets distracted and he crashes his car. Even though his legs are broken, T-Bird manages to climb out of the wreckage. As he sits against his car, Eric approaches him with a hammer. Eric asks T-Bird if he knows how many angels can dance on the head of a pin. T-Bird tells Eric that he doesn’t know and Eric tells him it depends on the tune.

T- Bird and his gang had enforced a tenant relocation program that Shelly Webster was against. Shelly had started a petition against the relocation program much to T-Bird’s frustration. In an attempt to intimidate Shelly to move out, on Devil’s Night, October 30, T-Bird and his gang broke into Shelly’s apartment and they started brutally assaulting her. While assaulting Shelly, T- Bird said “Abashed the devil stood, and felt how awful goodness is”, a quote taken from Paradise Lost. When Eric walked in, Tin Tin threw a knife at him, striking him in the chest, and wounding him. Shortly after that, while Eric’s lying on the floor, T- Bird whistles to Tin Tin and Skank, and they bring Eric in front of him. Along with Funboy, T- Bird then proceeds to shoot Eric in the chest and they kill him by tossing him out of the window.

A year after Eric and Shelly’s murders, T-Bird is sitting in a bar with Funboy, Skank, and Tin Tin, smoking and drinking as he makes a toast to Devil’s Night, commenting that it’s his new favorite holiday. T-Bird then puts his cigar out on his tongue, burning his tongue in the process, much to the amusement of his friends. Things start to get tense when Tin Tin calls Skank a “pussy” for not drinking, causing Skank to retaliate by pulling a gun on Tin Tin, Tin Tin then pulls a knife on Skank, Funboy pulls a gun on Tin Tin, and T- Bird pulls a gun on Funboy, before waving it around asking which one of them wants to bet that his weapon isn’t loaded. The tension settles when T-Bird starts chanting “Fire it up”, getting the rest of the group to join in with him. The groups settles when Darla brings them another round of shots.

Sometime after that, T-Bird and Skank go to Club Trash. While Skank orders drinks, T-Bird goes to see Grange who tells him to gather his gang for the following night. When T- Bird asks to see Top Dollar, Grange informs him that Top Dollar’s busy.

Later that night, following Tin Tin’s death, T- Bird goes to see Top Dollar. T- Bird assures Top Dollar that he had nothing to do with the destruction of Gideon’s pawn shop after Grange had informed him. He informs Top Dollar that a member of his crew got himself killed. T- Bird goes on to tell Top Dollar that somebody stuck Tin Tin’s own blades into "every one of his major organs in alphabetical order". Top Dollar then snorts cocaine before asking T- Bird if he’s going to work for him tomorrow, to which T- Bird confirms, before leaving.

Later that same night T- Bird is walking through the neighborhood with Skank. However, unbeknownst to T-Bird, he’s being watched by the crow. T-Bird is telling Skank that they’re in this together and if one falls they all fall. T-Bird then goes on to express disbelief at Tin Tin’s death. Just then, T- Bird starts chanting “Fire it up!” with Skank. They continue walking and T- Bird checks his watch commenting that Funboy hasn’t shown up yet. T- Bird then instructs Skank to get smokes and beers from the store while he waits in a car. While he’s waiting he starts smoking a cigar and he spots a crow that landed on the hood. Just then he catches a glimpse of a person in the backseat. Although he has a gun in his hand, T- bird isn’t quick enough and a resurrected Eric pulls a gun on him. Not initially recognizing him, T-Bird asks what Eric was supposed to be, and Eric simply replies “I’m your passenger”. Eric takes the cigar out of T- Bird’s mouth and the gun out of his hand and tells him to drive, and T- Bird complies. T-Bird asks Eric what he wants, offering him money and drugs. T- Bird comments that Eric would be a great asset to their group, as T- Bird had just figured out that Eric was the one who killed Tin Tin. When T-Bird asks if Eric is doing what he’s doing for business purposes, Eric just cocks the gun and tells him to drive faster. As T-Bird is driving, he catches the attention of the police commenting that the police aren’t their friends. T-Bird tries to assure Eric that they can work out any personal problems.

After losing the police, T-Bird stops his car near a pier. While Eric is strapping T- Bird to the driver’s seat of the car with duct tape, T- Bird tells Eric that he remembers Shelly, explaining that he and his group wanted to strike fear into her because she didn’t want to go along with their tenant relocation program. He then goes on to blame Shelly’s “idiot boyfriend”for turning a “..simple sweep and clear into a total cluster fuck”, questioning why anyone would care now because that happened a year ago. T-Bird yells at Eric to tell him what he wants, demanding that Eric speak to him. He then gets a good look at Eric’s face and comments that he recognizes him, and also acknowledges that Eric is not the same as before, saying that it’s not possible for Eric to be here as Eric had died and in the real world people don’t come back to life. As Eric finishes taping T-Bird to the driver seat of the car, T-Bird continues to yell “There ain’t no coming back!” As Eric straps T- Bird’s foot down on the gas pedal, T- Bird’s last words were “Abashed the devil stood, and felt how awful goodness is”. As he repeats the last six words twice more, Eric puts an explosive in T-Bird’s lap and puts the car in drive. The car drives to the end of the pier and T-Bird dies in the following explosion.

T-Bird and his gang break into Shelly’s apartment

“Abashed the devil stood. Does that get you sweaty?”

T-Bird and his gang after they kill Eric

“Which one of you motor city motherfuckers wants to bet me this one isn’t?”

“This is the really real world there ain’t no coming back.”

“Abashed the devil stood, and felt how awful goodness is...”

T-Bird as he appears in the comic

T-Bird tries to run from Eric 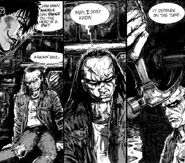