The Skull Cowboy is a spirit that serves as somewhat of a guide for the crow. He is a guide for all of the souls in the land of the living that find themselves in Limbo. He was set to be played by Michael Berryman in the 1994 film before his scenes were deleted, and he was portrayed by Kadeem Hardison in the 1998 television series.

The Skull Cowboy first appears in one of Eric’s memories. Eric recalls a time when he was on the train and he looked out of a window and saw a horse get caught in a barb wire fence. When he faces away, the Skull Cowboy is the one looking to collect Eric’s train ticket.

The Skull Cowboy appears for the final time when Eric is faced with the spirit of the horse. When he shoots and kills it, the Skull Cowboy complements his shooting.

The Skull Cowboy first appears when Eric Draven is resurrected and climbs out of his grave. He tells Eric that he’s impressed that Eric is walking around even though he’s dead. He then reprimands Eric telling him that Eric let the thugs beat him and kill Shelly, ultimately blaming Eric for his and Shelly’s deaths. He then questions why he’s wasting his time with Eric.

Skull Cowboy portrayed by Michael Berryman in the 1994 film 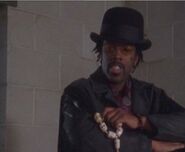 Skull Cowboy portrayed by Kadeem Hardison in the 1998 television show
Community content is available under CC-BY-SA unless otherwise noted.
Advertisement