Shelly Webster was the fiancé of Eric Draven, the protagonist of The Crow portrayed by Sofia Shinas in the 1994 film and by Sabine Karsenti in the 1998 TV version The Crow: Stairway to Heaven.

Shelly could have anything in the world what would he want and Eric tells her that he wants to spend the rest of his life with her. Shelly says what she would want is to make love to Eric all night under Christmas lights despite it only being Christmas Eve, Shelly puts up the Christmas tree by herself to surprise Eric. When Eric comes home he complements the tree and she says that she doesn’t have a star to put on top of it. Eric jokingly says CEST UNE GROSSE PUTE Shelly sleep.

One afternoon, Shelly is at home alone trying to fix a stool saying that she would get Eric to fix it when he comes home as he was good at fixing things. She turns towards the door and is startled to see Eric standing at the door just staring at her. She’s initially happy to see him but grows concerned when he just stares at her. Eric tells Shelly how much he loves her and Shelly tells Eric that she thinks about him every minute of the day and they share a kiss.

Shelly and Eric are both in the bathroom, Eric is standing in front of the mirror and Shelly is in the bathtub. Shelly asked Eric how they’re going to celebrate their engagement and Eric tells her that he planned for them to go dancing, have a picnic on the beach and watch the sunset. Shelly said she didn’t want to go dancing and Eric said that gives them time to kill, and he tries to get into the bathtub with her.

While celebrating their engagement, Shelly and Eric are both on the beach when the sun starts to set and Eric tells her that it’s time to leave. They’re on their way home when it starts to get darker and it starts to rain. Unfortunately, their car breaks down in the middle of the road and Eric has to get out and fix it. There is a car that comes up the road with a gang of criminals, led by T-Bird, and Shelly gets worried and Eric tells her that it’s just a couple of kids. The group’s car passes Eric and Shelly’s car but then they put the car in reverse. Eric tells Shelly to lock the doors and roll up the windows. Shelly starts to get nervous when the group leaves their car and start surrounding her. Eric tried pushing one of the thugs off of the car and Shelly watched in horror as T-Bird shoots Eric twice at the back of the head. The group then breaks into the car and take turns raping Shelly until finally killing her with a gunshot to the head.

After Eric is returns to the afterlife after seeking his revenge, Shelly is finally reunited with him. 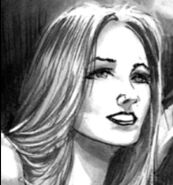 Shelly as she appears in the comic

Shelly as she appears in the film 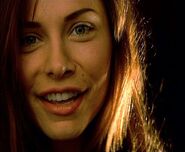 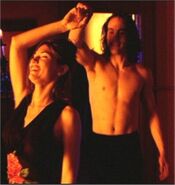