Eliza Hutton is the former fianceé of late American actor and martial artist Brandon Lee, who died in 1993 prior to their wedding. She has worked in Hollywood in various roles including in casting, story production, and development. Eliza was credited as being Brandon’s on-set assistant due to being on the set of The Crow.

Eliza first entered the world of entertainment in the 1980s working for a number of producers. Her first known credit was as a casting assistant for the 1989 film Arena. In 1990, Eliza was an assistant to Renny Harlin for the film Die Hard 2. She continued to work for Harlin when he moved to Fox. In 1991, Eliza started working as a story editor for Kiefer Sutherland's Stillwater Productions. She travelled with Lee during the world Rapid Fire tour. Brandon Lee while he promoted Rapid Fire, both Eliza and Brandon filmed a cameo appearance in the film Sex, Lies and Video Violence, as a couple waiting to get into a club. In 1993, Eliza often accompanied Brandon on the set of what would be his last film, The Crow where she supported him as his assistant on set. She was on the set so frequently she was credited as the assistant to Mr. Lee. Today, Eliza continues to work in Hollywood. 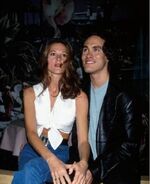 Brandon and Eliza at a movie premiere

Dedication
Add a photo to this gallery
Retrieved from "https://thecrow.fandom.com/wiki/Eliza_Hutton?oldid=5770"
Community content is available under CC-BY-SA unless otherwise noted.