The Crow Wiki
Register
Don't have an account?
Sign In
Advertisement
in: The Crow (film) Cast, Deceased Actors

Brandon Lee was an American actor martial artist and fight choreographer. He was the older child and oldest son of American martial artist and actor Bruce Lee. He is best known for his portrayal of Eric Draven in the 1994 film adaptation of James O’Barr’s comic book, The Crow.

Brandon Bruce Lee was born in Oakland, California as the first child and only son of martial artist and actor Bruce Lee and his wife Linda Emery who was 19 at the time. Brandon's younger sister Shannon was born four years later in 1969. As a child, he, along with his sister Shannon, had frequently visited their father on movie sets. During this time, Brandon developed an interest in acting. In 1971, the family moved to Hong Kong, then a British colony.

When Brandon was eight years old, his father died on July 20, 1973 at the age of 32 after suffering from cerebral edema. Bruce Lee was buried at Lake View Cemetery in Seattle, Washington. Following his father’s death, Brandon and his family moved back to California in 1974 after a year living in Seattle.  For a period of three months between September and December 1973 he lived with his aunt in Canada.

Brandon attended Chadwick High School but was asked to leave due to insubordination, just three months shy of his graduation from high school. He eventually received a GED in 1983, and attended Emerson College in Boston, Massachusetts where he majored in Theater Arts.

Brandon dropped out after one year and returned in L.A in 1984.

Brandon made his acting debut in 1986 in the television film Kung Fu: The Movie as Chung Wang, opposite David Carradine. The film was released on his 21st birthday. Brandon's first theatrical film role was as Brandon Ma in the Hong Kong film Legacy of Rage, for which he received a Hong Kong Film Award nomination for the best new performer. He also starred as Michael Gold in Laser Mission, Johnny Murata in Showdown in Little Tokyo opposite Dolph Lundgren, and Jake Lo in Rapid Fire. In 1992, he landed the lead role of Eric Draven in The Crow a movie based off of James O’Barr’s comic book series and directed by Alex Proyas. Filming started on Brandon’s 28th birthday on February 1, 1993 and was scheduled to end April 4, 1993.

Also during his career, Brandon starred as Johnny Caine in the television pilot Kung Fu: The Next Generation but the pilot was never picked up. Following that, he had made his first and only appearance acting on a television series as Kenji in the series Ohara in the episode What’s In a Name. Brandon was also a guest on The Tonight Show and was interviewed by Jay Leno, The Big Breakfast and was interviewed by Paula Yates, and he guest-hosted Thursday Night Prime on HBO in 1991. While promoting Rapid Fire in Sweden, Brandon and his fianceé, Eliza Hutton, filmed a cameo appearance in the film Sex, Lies and Video Violence as a couple waiting in line to get into a club.

Brandon met Eliza 'Lisa' Hutton while in Renny Harlin’s office in 1990. Harlin and Lee shared the same agent at the time. Brandon and Eliza started dating after that. Prior to their relationship, Brandon had been a confirmed bachelor, who had a string of non-committal relationships. After he started dating Eliza. Brandon asked Eliza to move in with him in 1991 and they eventually became engaged the following year, in Italy.

Brandon and Eliza had two cats, one of which was Kato, named after Bruce Lee’s character from The Green Hornet and the other named Mushroom.

The pair had planned to get married on April 17, 1993, in Ensenada, México on the beach at sunset and start a family immediately after the wedding.

On March 31, 1993, while filming a scene for the movie The Crow, Brandon was accidentally shot and killed by his co-star Michael Massee. In the scene, Brandon’s character, Eric Draven, was to walk into his apartment after grocery shopping, only to find his fiancé Shelly getting beaten and raped by thugs. Massee’s character, Funboy, was supposed to shoot Brandon’s character, Eric, with a Smith & Wesson model 629 .44 Magnum revolver from a distance of 12ft- 15ft away as he walked into the room. When the gun was fired, Brandon had fallen backward instead of forwards like what had been previously rehearsed. According to witness accounts, the cast and crew initially thought he was joking, they soon realized that something was wrong when Brandon continued to lay on the floor after director, Alex Proyas yelled “Cut!”. It was initially thought that Brandon somehow hurt himself by falling backward. It was soon feared that he had internal injuries when his abdomen started to swell. When he was rushed to New Hanover Regional Medical Center, the paramedics had put inflatable pants on Brandon in an attempt to push the blood from his legs to his upper body. Brandon underwent six hours of surgery where he was given around sixty pints of blood, however, he was ultimately pronounced dead at 1:03 PM at the age of 28 with his fiancee at his side. When an autopsy was conducted, what appeared to be a .44 magnum bullet had been removed from his body, with his death certificate citing a gunshot wound to the abdomen as the cause of death. Later the ballistical information indicated that it was a modified bullet rather than an actual .44 real-live round.

What had led to the incident was that the prop crew, instead of purchasing actual dummy bullets, had tried to make their own makeshift dummy bullets using live rounds, removing the tips and gun powder, and reinserting the bullets into the gun. At some point during filming, the gun had been fired with the makeshift dummy bullets still in the chamber. Setting off the gun had caused one of the makeshift dummy bullets to be partially lodged in the barrel. The same gun would remain unchecked for two weeks. When the blanks were loaded into the same gun, the prop crew had either disregarded the severity of the situation or were completely unaware of it. When Massee fired the gun, the blank round had caused the makeshift dummy bullet to be fired at Brandon with virtually the same force as a live round, striking him in the abdomen, severing an artery in his spine, causing him to bleed to death. The footage of his death was eventually destroyed. The day of Brandon’s death, the weapons experts had been sent home early so the crew can save money. Ironically the movie cost an extra $8 million to finish without Brandon. Brandon died just two weeks before his wedding to his fianceé Eliza Hutton.

Brandon’s family had a private funeral for him attended by only 50 friends and family, including his fianceé Eliza and her family in Seattle on April 3, 1993. The family restricted guests due to Linda Lee's own experience when she buried her husband and banned all media from the service. As there was no family held wake, an industry memorial service was held in Los Angeles the day after his funeral, organized by his manager Jan McCormack and held the day after in Los Angeles. As he didn’t have a will or burial plans, Brandon’s family decided to bury him at Lake View Cemetery in Seattle, Washington in a plot next to his father Bruce Lee who died nearly twenty years earlier. This plot was originally reserved for Linda Lee Cadwell, Brandon's mother.

Brandon’s gravestone was designed by Kirk McLean as a Tribute to Brandon and Eliza's love. According to Brandon’s mother, “It represents their true love and bond, and how the tragedy of his death separated their mortal lives together.”

“Because we don’t know when we will die, we get to think of life as an inexhaustible well. And yet everything happens only a certain number of times, and a very small number really. How many more times will you remember a certain afternoon of your childhood, an afternoon that is so deeply a part of your being that you can’t even conceive of your life without it? Perhaps four, or five times more? Perhaps not even that. How many more times will you watch the full moon rise? Perhaps twenty. And yet it all seems limitless...”,

This was a quote Brandon used in one of his last interviews taken from Paul Bowles’ book The Sheltering Sky, a quote he and his fiancee chose to put on their wedding invitations. As the quote is not attributed to Bowles on Brandon’s tombstone, fans were mistakenly led to believe that Brandon came up with the quote himself.

Brandon’s tombstone also includes a written tribute to him and his fianceé; “For Brandon and Eliza ever joined in true love’s beauty”.

No criminal charges were filed against the filmmakers of The Crow. However, after Brandon's death, his fiancee Eliza petitioned for gun safety regulations on film sets.

After Brandon’s death, his mother Linda and fiancee Eliza, had supported director Alex Proyas’ decision to complete the film. Brandon had filmed most of the scenes for The Crow as he had died when there were only eight days left of filming. The incomplete scenes were completed using stunt doubles and CGI to put Brandon’s face over the faces of the stunt doubles.

The film was released on May 11, 1994 to critical and commercial success, making $50.7 million at the box office in the U.S and over $100 million worldwide, more than it’s budget of $23 million. For his work in The Crow, Brandon was posthumously awarded the Fangoria Chainsaw Award for best actor, and he was nominated for an MTV Movie & TV Award for best male performer.

The Crow was dedicated to Brandon and Eliza and has since become a cult classic. The film represented how love transcends death. 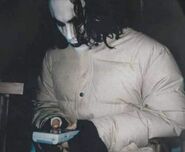 Brandon playing Rochelle Davis’ Gameboy behind the scenes of The Crow

Brandon Lee behind the scenes of The Crow

Brandon with his trainer and friend Darryl Chan.

Brandon Lee in his last interview on the set of The Crow. 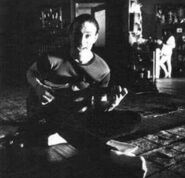 Brandon and his fiancee Eliza.

Community content is available under CC-BY-SA unless otherwise noted.
Advertisement