Actor
Angel David is an American actor who portrayed Skank in the 1994 film The Crow.

Angel’s first known role was as Juan the Bullet in the 1984 film Mixed Blood. Some of his other movies include The Forget-Me-Not-Murders, The Crow, Kiss of Death and Two Girls and a Guy. Angel also appeared in the Law & Order franchise. 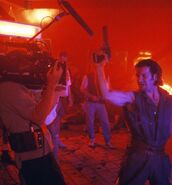 Angel behind the scenes filming a flashback scene
Community content is available under CC-BY-SA unless otherwise noted.
Advertisement